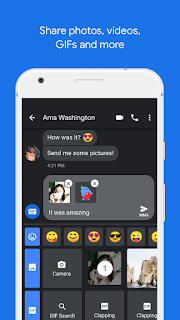 SMS is here to stay and no WhatsApp, Facebook Messenger will ever change that. That’s the reason Google keeps updating Android’s official app for texting and chat. Android Messages was recently updated with web support, allowing users to send and reply to messages on their computers without having to pick up their phones. A very handy feature that Google is improving furthermore with the last update.

Android Messages is getting a new look. Not that Google entirely redesigned the app; it pretty much looks the same. But they added a dark theme and if you’ve been following Android news lately, dark theme is making the headlines as Google kind-of working, not to say struggling, at bringing a dark theme to Android.

In addition to dark theme, Google is also giving some love to Messages web with the ability to search GIF and stickers. A great addition if you’re fans of those.

Of course, this update includes the usual anonymous bug fixes and performance improvements. Android Messages is available for download in Google Play Store.