Avast SecureLine is a simple VPN from the popular security vendor Avast Software, but powered underneath by the HideMyAss! network (HideMyAss! is now a part of the Avast group).

SecureLine's specs are relatively ordinary. There's an average-sized network of 55 locations (P2P is supported on just 8) in 34 countries. You get clients for Windows, Mac, iOS and Android, but nothing more – not even downloadable OpenVPN configuration files which might let you manually set up other software and devices.

And there's no zero-knowledge DNS system, no custom protocol to bypass VPN blocking, no sign of anything even faintly advanced. SecureLine isn't bad, but it's not outstanding, either. It's more focused on being 'just good enough'.

Pricing is, well, complicated, as Avast does things very differently to most of the competition.

You can opt to buy a one-year license covering a single device, for instance. Covering one Android or iOS device is relatively cheap at £15 ($19.50), but Windows and Mac licenses are more expensive at an annual £50 ($65), or the equivalent of £4.17 ($5.42) a month. Private Internet Access currently charges $3.33 (£2.56) a month on its annual plan, and that gets you coverage for any five devices, not just one. 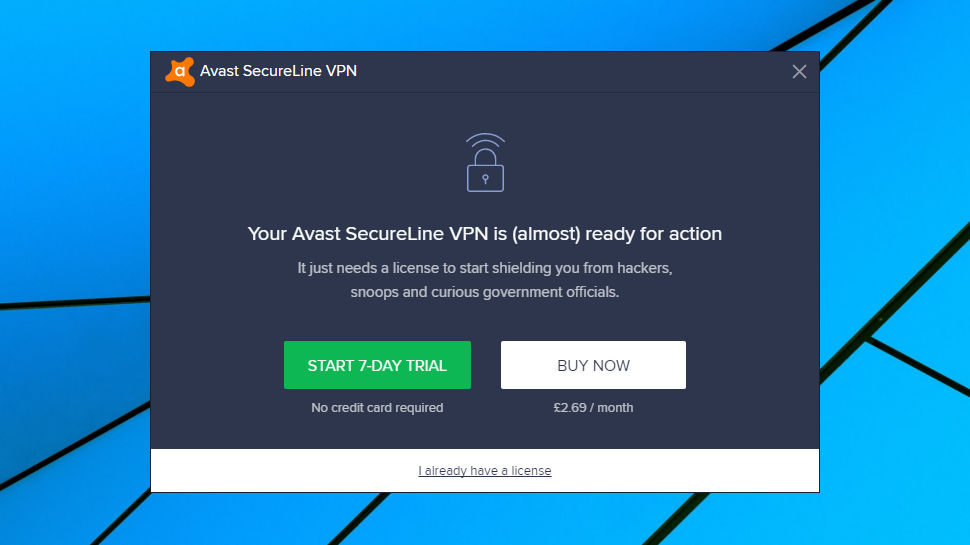 Alternatively, paying an annual £65 ($8.40) – equivalent to a monthly £5.42, or $7 – gets you coverage for up to five devices. That's still more expensive than Private Internet Access, but it's cheaper than many others, and there's another important advantage. Most VPN accounts only cover you for devices owned and used by the account owner. SecureLine's five devices can be owned and used by anyone. A single license could cover the whole family.

The service seems reasonably priced, then. And if you're tempted to try it out, a no-strings-attached seven-day trial makes it easy, no payment details required. 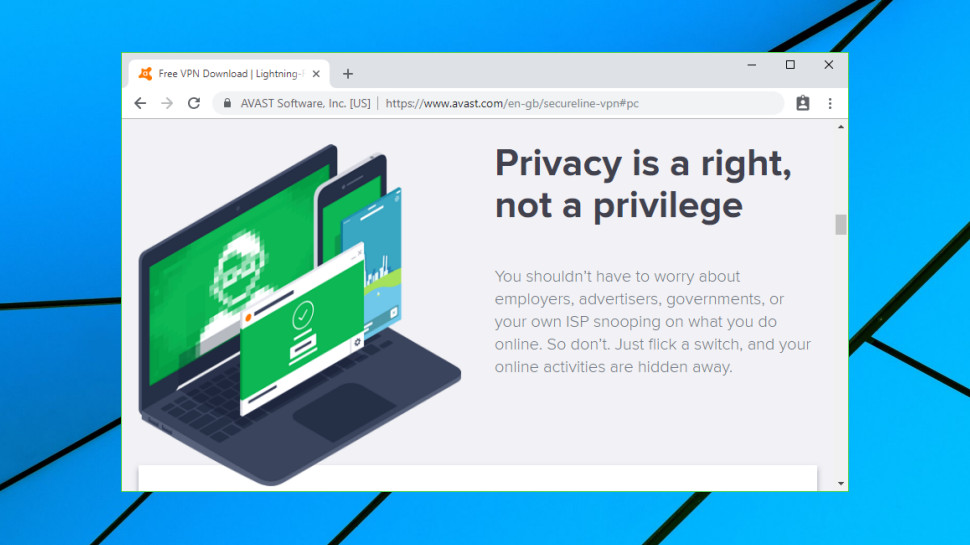 Avast's support for the highly secure OpenVPN protocol using AES-256-CBC gets it off to a good start in the privacy stakes, but there's little else to say about the service. There's no control over protocol settings, no support for other protocols, no kill switch, no custom leak protection technologies or other privacy-related extras.

This isn't quite as bad as it seems. SecureLine more than covered the basics during our tests, preventing DNS and WebRTC leaks which might give away clues about our identity and online activities.

Understanding Avast's logging policy was more difficult, mostly because the company has so many other services and applications to explain. We fought our way through the mammoth 20,000-word privacy policy, though, and eventually uncovered some useful information.

The company explains that it doesn't record your browsing history, stating 'we do not store details of, or monitor, the websites you connect to when using our VPN service.'

Sounds good, until you read about all SecureLine's session logging: 'We will store a time stamp and IP address when you connect and disconnect to our VPN service, the amount of data transmitted (up- and download) during your session together with the IP address of the individual VPN server used by you.'

This may not matter very much if you're just using the VPN to watch US YouTube clips, or as a more secure way to access your emails over public Wi-Fi. But if you're downloading torrents or doing anything else where someone might record and investigate your IP address, it could allow them to connect those actions back to your Avast account. 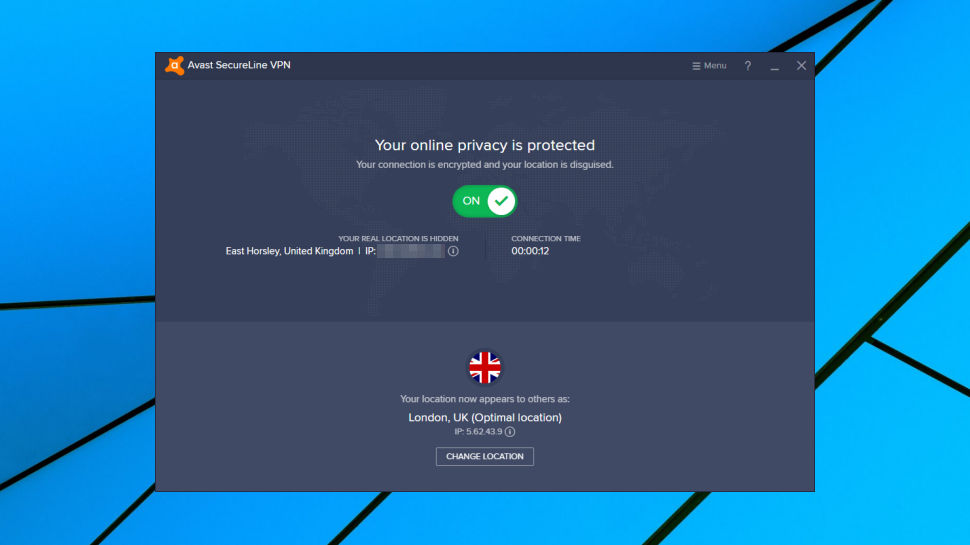 Avast knows what it's doing with security software, and the Windows client was one of the most polished and professional we've tried. Installation was quick and hassle-free (apart from being presented with a 10,000+ word license agreement, anyway), it was supremely easy-to-use, and everything worked just as we expected.

We weren't asked for payment details, and the client didn't even ask us to register with an email address. You're able to set up and use the service for a full seven days without providing any personal information.

The Windows client interface has clearly been designed with the VPN novice in mind. An arrow draws your attention to the Connect button, and simple captions explain what each function does, for example: 'Turn on your VPN to encrypt what you do online', or 'When your VPN is on, your location will appear to others as <USA>.'

The client displays notifications so you can tell when it's connecting, connected or disconnected. We like to see that, as users need to know when they're protected or not, but there's one annoying issue. The client uses its own notification system rather than the native Windows desktop method, and its pop-ups grab the window focus.

If you're typing something in Notepad, and a notification appears, your typing is interrupted and you must click or Alt+Tab back to the Notepad window before you can carry on. There's an option to turn the notifications off, but we would prefer it if Avast implemented them properly in the first place. 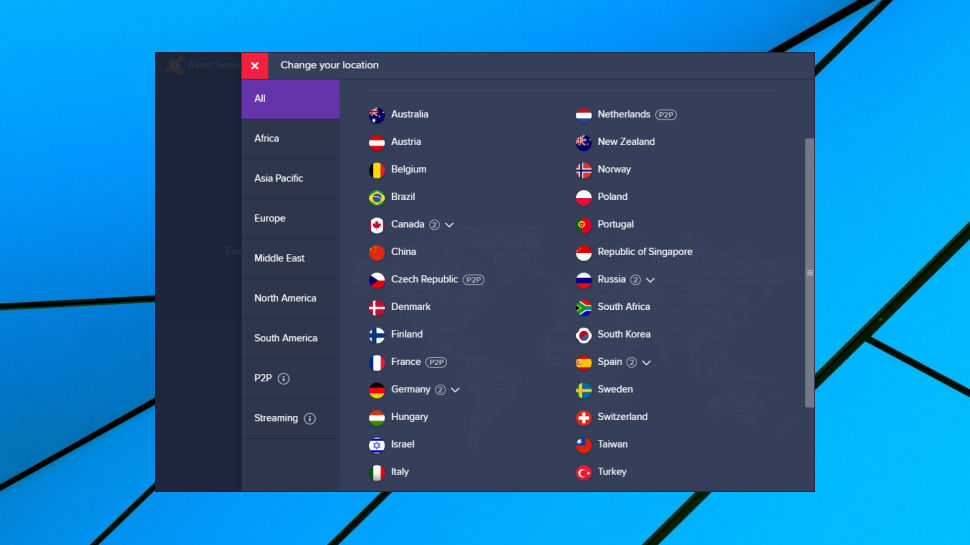 The feature list is okay in overall terms, but there are issues here. For example, the location picker allows filtering servers by continent, and to display P2P and streaming-optimized locations – but there's no indication of server load or ping time to help you make the best choice. Neither is there any favorites system to speed up the process of reconnecting to commonly-used servers. 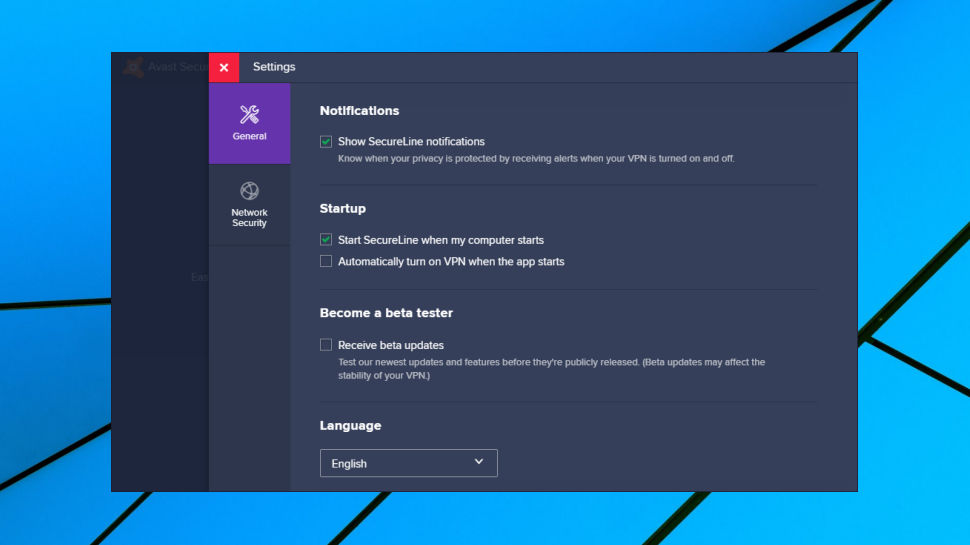 Even SecureLine's system tray icon has only a very minimal right-click interface. Many clients will allow you to choose a location direct from the right-click menu, but here, if you don't want to choose the default server, you must open the full client and click, click, click your way to whatever location you need.

We checked out SecureLine's Android app to see if it might hold some surprises, but for the most part, it worked much like the desktop edition. Connect and disconnect with a tap, and choose your location from a long list (even longer here, as it's just a single list with no option to filter by continent). There’s still no favorites system or recent servers list to speed up reconnections.

There's just one small but welcome bonus with a more powerful auto-connect system. Instead of just having the app connect when you access an insecure Wi-Fi network, you can have the service connect whenever it accesses anything other than specific trusted networks, or when you're using a cellular connection.

That's good news, and apart from the lack of a kill switch (and maybe the notifications), the apps do nothing obviously wrong. But they don't excel at anything, either, and we saw nothing which would persuade us to pick SecureLine over any of the big-name competition. 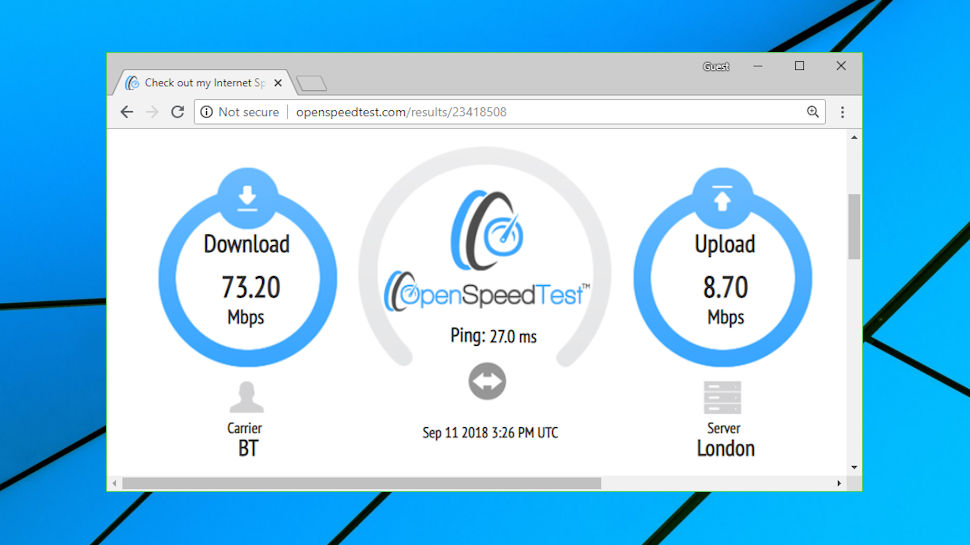 Avast SecureLine doesn't provide OpenVPN configuration files, which meant we weren't able to run our usual automated performance tests. Instead, we switched back to our manual approach, connecting to various servers via the apps and using SpeedTest.net, Fast.com and other websites to check their speed.

UK download speeds were consistently high at 50-60Mbps on our 75Mbps test line. Switching to nearby European countries where we would expect high performance – France, Germany, Netherlands, Sweden – gave us much the same results.

Heading a little further afield showed one or two issues, with for example Poland returning anything from 12 to 31Mbps. That's slower and less consistent than we expected, although still usable for most tasks.

US speeds were very reasonable at an average of 54Mbps on the east coast, to 35Mbps on the west.

Going long distance gave us a mixed bag of results, with Australia giving us a solid 25-40Mbps, while Malaysia struggled to a lethargic 1.8-3.6 Mbps.

Overall, Avast SecureLine offers above average speeds from most servers, with just a few exceptions. If you only need to use a couple of servers in some very common locations (London, New York) then you'll probably be fine; if you're looking further afield, run your own speed tests before you buy. 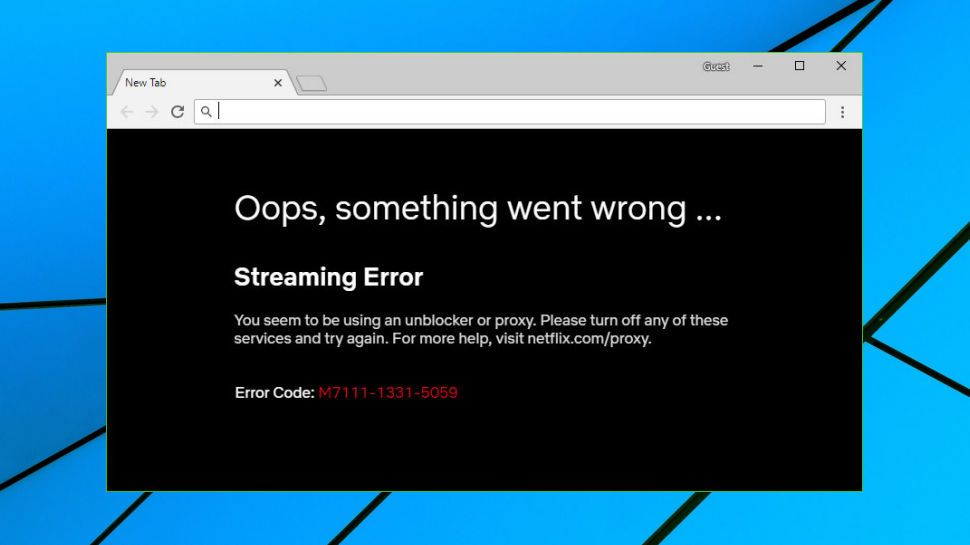 Avast SecureLine's Windows client offers only four servers it says are 'optimized for streaming': one in the UK, and three in the US (New York, Miami, and, apparently, Gotham City – which is maybe the very definition of a virtual server). Would that be enough to allow us access to geoblocked content?

We began by trying to access US-only YouTube content, and the results were a surprise. We don't recall the last time we saw YouTube block anything, but we weren't able to get in via Miami or 'Gotham City'. Fortunately, New York worked just fine, and we were able to view and stream YouTube clips.

We moved on to try accessing BBC iPlayer via SecureLine's 'Wonderland, UK' server, but without success. The site detected the VPN and displayed its standard 'content is not available in your location' warning message.

So far, so not-very-great, but the picture improved when we logged back into the New York server and were able to view Netflix content without difficulty. Netflix blocks new IPs all the time and this can change at any moment, but right now, at least, Avast SecureLine makes it easy to stream content, wherever you are. 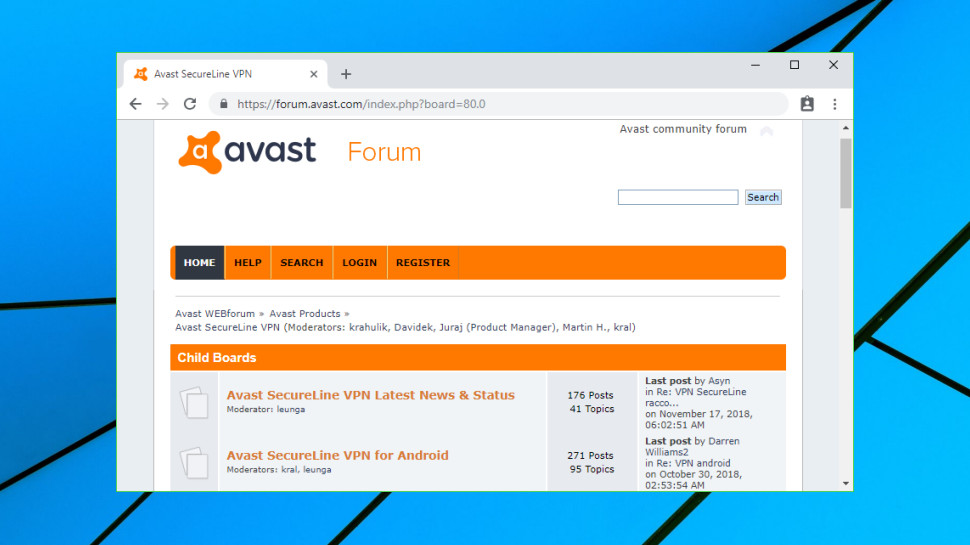 The Avast support site is a huge resource, absolutely crammed with setup, usage and troubleshooting guides. Unfortunately, the vast majority are for Avast's other products. The SecureLine section is probably the most basic VPN knowledgebase we've ever seen.

No, forget that – 'basic' is too kind. The main page lists just 15 articles organized into three categories (Basic Usage, Subscription and Purchase, Technical Issues), and many of those are on something other than core VPN issues (creating an Avast Account, GDPR Compliance, two articles on activating the product, two more on cancelling automatic renewal – you get the idea).

We dug a little deeper and found a SecureLine FAQ. This does have more relevant topics, but there's little detail, and nothing that compares with specialist VPN providers such as ExpressVPN.

If you can't find any immediate help online, you can try posting a question in the SecureLine section of the Avast support forum. This isn't particularly busy, but it does get some use – the Windows section of the forum alone had nine threads created in October 2020, for instance, and most of these had a helpful response in less than an hour.

If you're still in trouble, you can always contact Avast support directly. There's no live chat, just a web form, and a disclaimer that 'Avast Support usually responds within two business days' didn't fill us with confidence, but it's available if you need it.

Easy-to-use and with above average performance, Avast SecureLine could be a smart VPN choice for a single computer, especially with a cheap mobile device license. But beware – there are barely any features, the inflexible licensing system won't work for everyone, and you can't set up SecureLine on your router as a shortcut.