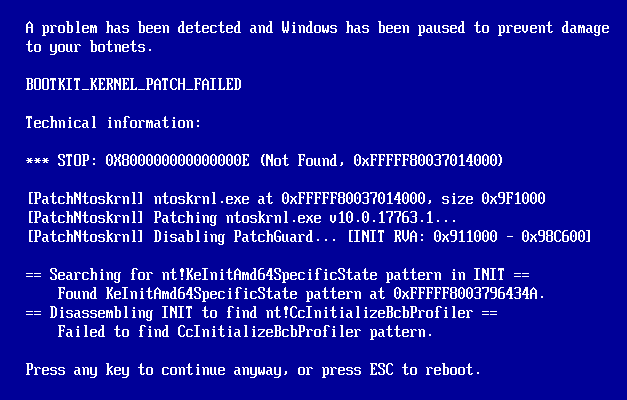 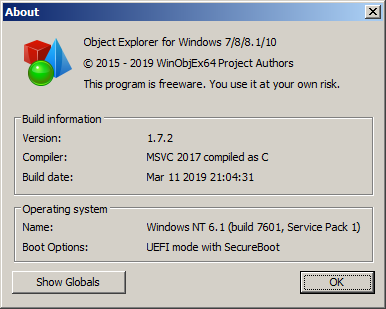 How to use
There are two ways to use EfiGuard: booting the loader (easiest), or using the UEFI shell to load the driver.

Using the UEFI shell to load the driver

Compiling EfiGuardDxe and the loader
EfiGuard requires EDK2 to build. If you don’t have EDK2 installed, follow the steps in Getting Started with EDK2 first as the EDK2 build system is fairly complex to set up. This section assumes you have a workspace directory that your WORKSPACE environment variable points to, with a copy of EDK2 checked out in workspace/edk2. Supported compilers are MSVC, Clang, GCC and ICL.

This will produce EfiGuardDxe.efi and Loader.efi in workspace/Build/EfiGuard/RELEASE_VS2017/X64. To build the interactively configurable loader, append -D CONFIGURE_DRIVER=1 to the build command.

The output binary EfiDSEFix.exe will be in Application/EfiDSEFix/bin.
The Visual Studio solution also includes projects for EfiGuardDxe.efi and Loader.efi which can be used with VisualUefi, but these projects are not built by default as they will not link without additional code, and the build output will be inferior (bigger) than what EDK2 produces. Loader.efi will not link at all due to VisualUefi missing UefiBootManagerLib. These project files are thus meant as a development aid only and the EFI files should still be compiled with EDK2. To set up VisualUefi for this purpose, clone the repository into workspace/VisualUefi and open EfiGuard.sln.

While EfiGuard is a UEFI bootkit, it did not start out as one. EfiGuard was originally an on-disk patcher running on NT (similar to UPGDSED), intended to test the viability of a disassembler-based aproach, as opposed to using PDB symbols and version-specific signatures. PatchNtoskrnl.c still looks very much like this original design. Only after this approach proved successful, with no modifications to code needed in over a year of Windows updates, did UEFI come into the picture as a way to further improve capabilities and ease of use.
Some of the benefits provided by a bootkit approach include:

The initial incarnation of EfiGuard as a bootkit was an attempt to get dude719’s UEFI-Bootkit to work with recent versions of Windows 10, because it had become dated and no longer works on the latest versions (like UPGDSED, often caused by version-sensitive pattern scans). While I did eventually get this to work, I was unsatisfied with the result mostly due to the choice of hooking OslArchTransferToKernel, which as noted above executes in protected mode and after ExitBootServices has been called. Apart from this, I was not satisfied with only being able to patch some versions of Windows 10; I wanted the bootkit to work on every EFI-compatible version of Windows x64 released to date. Because of this, I rewrote the bootkit from scratch with the following aims:

A big picture overview of the final EfiGuard boot flow is shown in the diagram above. For the individual component-specific hooks and patches, see EfiGuardDxe/PatchXxx.c in the source files. For driver initialization/unloading and the EFI Boot and Runtime Services hooks, see EfiGuardDxe.c.