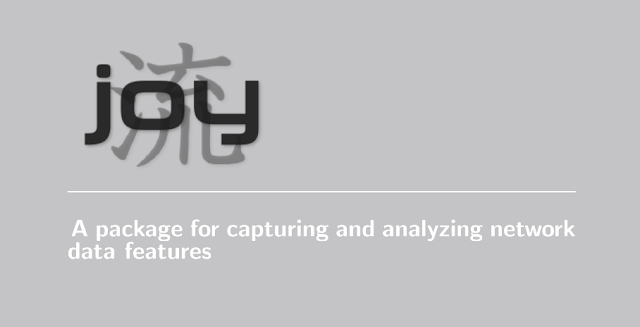 Joy is a BSD-licensed libpcap-based software package for extracting data features from live network traffic or packet capture (pcap) files, using a flow-oriented model similar to that of IPFIX or Netflow, and then representing these data features in JSON. It also contains analysis tools that can be applied to these data files. Joy can be used to explore data at scale, especially security and threat-relevant data.

TLS fingerprint database. Among other features, our approach builds on previous work by being fully automated and annotating TLS fingerprints with significantly more information. We have built a set of python tools to enable the application of this database, as well as the generation of new databases with the help of Joy. For more information, please see the TLS fingerprinting documentation.

Relation to Cisco ETA
Joy has helped support the research that paved the way for Cisco’s Encrypted Traffic Analytics (ETA), but it is not directly integrated into any of the Cisco products or services that implement ETA. The classifiers in Joy were trained on a small dataset several years ago, and do not represent the classification methods or performance of ETA. The intent of this feature is to allow network researchers to quickly train and deploy their own classifiers on a subset of the data features that Joy produces. For more information on training your own classifier, see saltUI/README or reach out to [email protected].

Release 4.0.1
We are pleased to announce the 4.0.1 release of the package, which has these features:

Release 4.0.0
We are pleased to announce the 4.0.0 release of the package, which has these features:

Release 3.0.0
We are pleased to announce the 3.0.0 release of the package, which has these features:

Release 2.0
We are pleased to announce the 2.0 release of the package, which has these features:

Quick Start
Joy has been successfully run and tested on Linux (Debian, Ubuntu, CentOS, and Raspbian), Mac OS X and Windows. The system has been built with gcc and GNU make, but it should work with other development environments as well.
Go to the Wiki for a guide on building: Build Instructions