Celebrating 50 years of being in the technology and home appliance business, and with a slogan of ‘Do What You Can’t’, Samsung hosted their annual MENA Forum 2020 at the idyllic city of Antalya, Turkey.

The MENA Forum is usually centered around showcasing the latest gadgets and products to the company’s many partners in the Middle East and North Africa (MENA) region, but also gives a chance for select media outlets to get a better look at what's in store for the rest of the year.

Samsung MENA President, Sungwan Myung, touted the company’s lead as the number one TV and refrigerator brand in the region, while putting forth a clear goal of ‘redefining entertainment’ in homes as it continues to roll out innovate solutions and partnerships to attract consumers into the Samsung ecosystem.

While Samsung didn't announce any new products, we did get a chance to look at the their latest lineup of TVs which includes the eye-bleeding 98” QLED 8K display, and the modular microLED-fused The Wall TV that can be morphed into any shape you like. 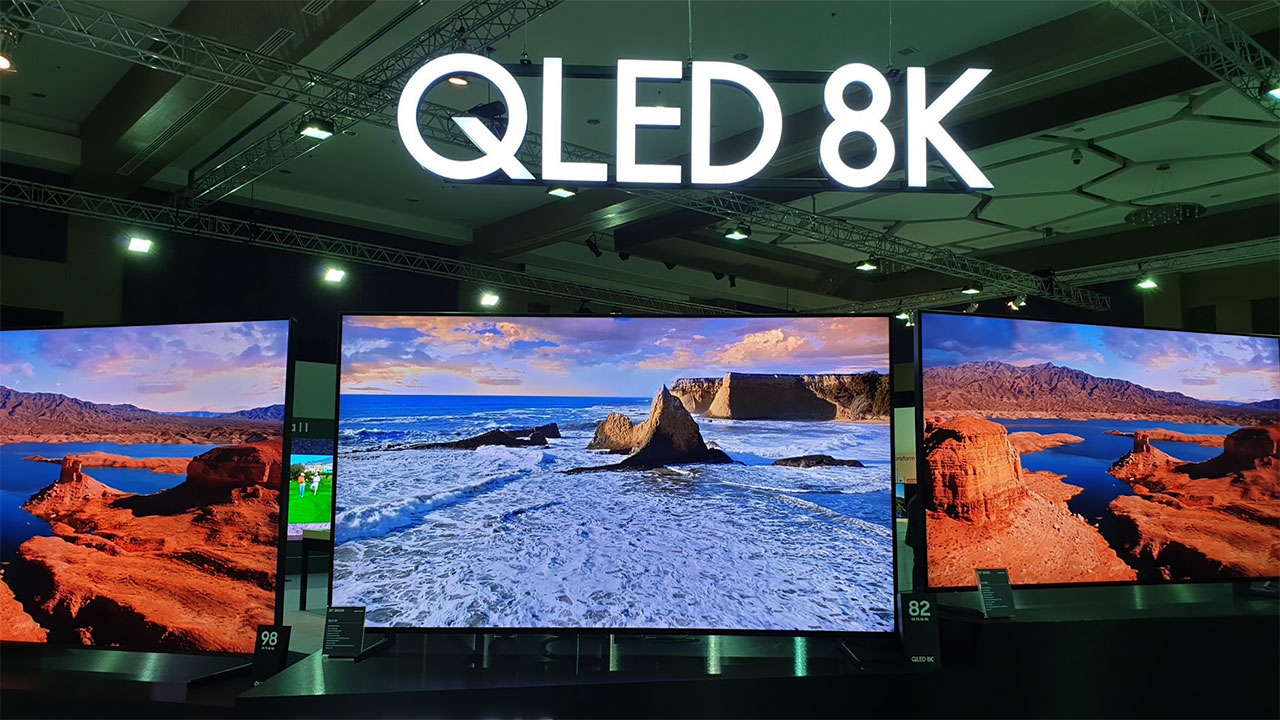 Samsung’s new 8K display is a sight to behold, and standing at 98-inches, it’s distractedly mesmerizing. The sheer amount of detail you can notice in a particular video is staggering, and the TV’s almost-bezel-less design provides for a truly immersive experience.

With 4000nits to work with, the display is brighter than our collective future, lending the muscle it needs to make colors pop and handle any range of HDR with relative ease.

Samsung is also evolving its Bixby voice assistant platform and will roll it out with the new lineup of TVs this year. Just like on any Galaxy smartphone, Bixby on TVs can be used to search for information (like the weather for example), search on Google, or even through the variety of apps available on the platform like Netflix, Prime Video, etc. Bixby will support English and French on launch, with support for different accents.

With the movies and gaming industries finally embracing the 4k realm, Samsung is ready to tackle the lack of 8k content with AI Upscaling, which uses machine learning magic to upscale any source to 8k resolution “through texture creation, noise reduction, and edge restoration.”

We can’t really say we noticed any major difference between normal 4k upscaling and 8k upscaling in a demo area specifically constructed to showcase this feature, but we will reserve our judgment when we eventually get our hands-on with the product. 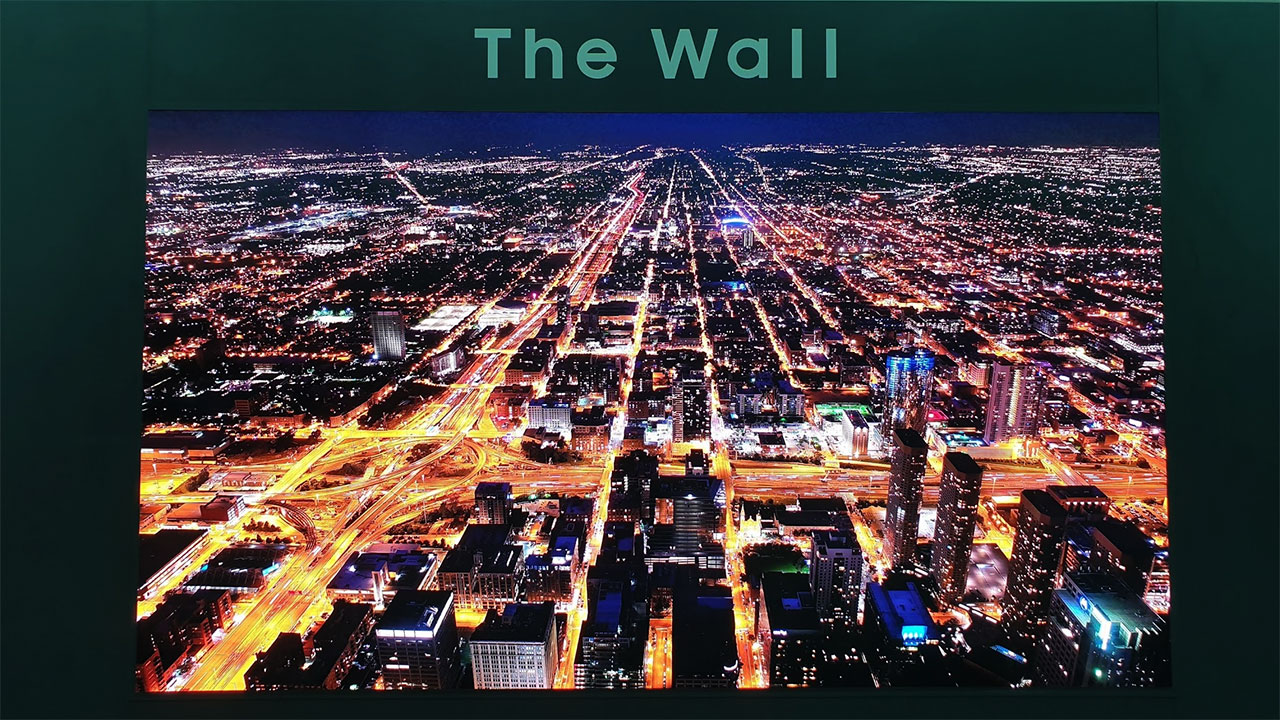 Samsung’s new modular TV uses microLED technology that not only renders deeper blacks and accurate colors, but allows them to be stacked like wall tiles to create a display according to your liking, in any shape or form you desire.

Of course, the display is touted as a superior product to conventional LEDs with a wider color gamut, greater color purity and enough peak brightness to render HDR images accurately. But it’s also built to last with with shock, dust and water resistance so it can be used in a variety of environments.

Samsung’s new Q70 Soundbar developed in collaboration with Harman Kardon is an impressive piece of kit. The speakers on the soundbar are designed to fire audio upwards which bounces off walls around the area to provide a natural surround sound experience.

Additionally, the on-board AI Sound adjusts audio in real time to deliver sound based on the kind of content that you are watching. Even in a crowded convention hall, the superior sound quality was clearly apparent with AI Sound, which greatly enhanced the clarity, volume and surround sound capabilities whenever it kicked in.

Initially announced in August 2020, Samsung Galaxy Home is long time coming but the company promises to release it in the first half of the year.

The virtual assistant was initially planned for an April release but was delayed for unspecified reasons. The Galaxy Home was demonstrated working seamlessly between other Samsung devices, including TVs, light bulbs, washing machines, and refrigerators.

Iterating on last year’s Wind-Free air conditioners, the new UFO-like Circular AC uses the same technology but does away with the conventional blade system of distributing air.

Instead, it uses booster fans which controls the air direction and throws air both horizontally and vertically for ‘surround cooling’. It also has an Auto Elevation Grill which lowers the filter down for easy reach and maintenance.

For refrigerators, Samsung introduced their new 4-Door and 3-Door refrigerators featuring the Flex Zone compartment which allows you to set its temperature independently from the rest of the fridge.

This Flex Zone compartment can be used to store a variety of items including cold drinks, snacks, vegetables, or can also double as a freezer if you want to store meat products.

The side-by-side 3-Door refrigerators takes a leaf out of their TV’s bezel-less design by doing something similar. These refrigerators employs SpaceMax technology to reduce the thickness of the compartments to provide more space.

Cut your laundry time in half – too bad, it doesn't fold them and iron them for you

The new QuickDrive washing machines cuts laundry time into half by using a main drum and a back plate so clothes move “in dynamic action and finish the wash” faster.

The washer also features a laundry assistant that provides suggestions on optimal washing cycles for different types of clothing, and also helps match material and color that are ideal to be washed together. Another cool feature is AddWash, which allows you to add small clothing items even when a wash is already underway.

Finally, Samsung’s POWERstick Jet200 is its latest vacuum cleaner that uses a five-phase cleaning system that separates large dust particles from the finer ones. It has enough suction power to employ a filter that traps 0.3-10um sized fine dust particles upto 99.999% of the time along with a slew of attachments, and a replaceable battery that lasts upto 60mins.