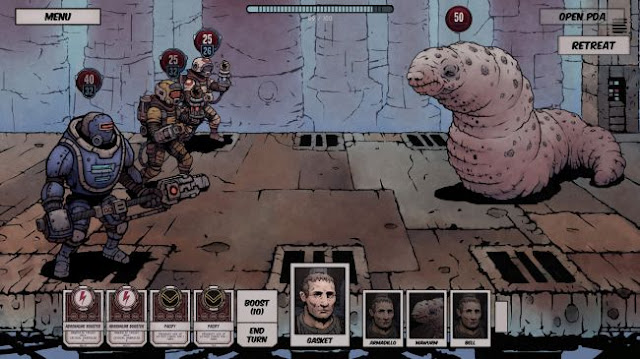 How does a “mix of Darkest Dungeon and XCOM with a pinch of Hearthstone and FTL” sound to you? Keen? Then you should probably keep an eye on Deep Sky Derelicts, a turn-based roguelike with card-based combat that’s leaving Early Access on September 26.
You control up to three mercenaries, exploring run-down alien space stations—called derelicts—beating enemies to a pulp, trading with merchants and searching for loot. You’ll be constantly upgrading your party with new items, and you can recruit new mercenaries as you progress. It’ll have both a combat-focused arena mode and a full campaign that will take up to 20 hours to complete.
The combat is probably the most interesting bit about it. You’ll have a deck that you customise and draw cards from at random during fights, playing cards to attack or use special abilities. It reminds me of Slay the Spire, except each card triggers a comic book-styled cutaway.
In the 1.0 update, developer Snowhound Games will add the final derelict—the Mothership—and finalise the game’s story. They’ll also tweak the balance of cards and items and overhaul the UI.
It’s £12.39/$15.99 on Steam right now, and the price will go up after release.